This continues the story of a trip through Cape York in Tropical North Queensland. You can read the beginning, where we spend a week or so camping in Rinyirru National Park. Read that part here.

You hear so many stories of woe coming from Cape York. While we were in Lakefield National Park, we met a group of 4WDers who were on their way south. One of the drivers had become complacent and didn’t slow down. He said, “The road just dropped out from under us, and we hit the ground with a bang. (Stuff) in the car went everywhere and we bent one of the trailing arms on the trailer.” This was in the morning. They had to leave the trailer on the side of the road, pull off the arm, drive it to the next town about two hours away, get it bent back and reinforced, drive back, fit it to the trailer, then find and set up camp in the dark that night. And they were the lucky ones. Before we had left Coen, arguably the start of the rough roads into the Cape, we had seen a Patrol with a hole in the side of the engine, two trucks without starter motors, one with a bent steering rod, and heard countless more tales of breakages and break downs. Even the trusty Patrol had rattled loose a roof rack mount and shaken one of the water tanks loose.

Despite the horror stories though, we met dozens of people who had the time of their lives tackling the Cape and our excitement was building. I had initially been anxious about taking the Old Telegraph Track, up through the middle, but by now, we were well and truly committed to it. Still, from Coen to Bramwell Junction, the track’s start point, we had a lot of driving to do.

After watching the tour group who pretty much parked us in while we camped at Coen, pack up and tow away their impressive collection of busted up 4WDs, we made our leisurely way up the Peninsular Development Road until we got to the Moreton Telegraph Station. Back in the old days of Morse Code and other backwards means of long-distance communication, the Station was a repeater in the telegraph line. These days it is a tourist stop and campsite, and with a section of the Wenlock River attractively named the ‘Barra Hole’, we thought a couple of nights here wouldn’t go wasted.

Moreton proved to be quite a beautiful place to rest after our hectic two days straight of driving (we covered about 600km in those two days). As well as the ‘Barra Hole’ which seemed empty over our stay, there are several short walks, a fair bit of history and plenty of nice places just to chill out.

The Wenlock River is a fascinating body of water. During The Wet, the river pretty much breaks its not-insignificant banks and a lot of big fish, sharks and crocodiles make their way up it in search of food. Brett, the caretaker, told us a story of a bull shark found in one of the deeper holes, not far away from camp, which had been trapped by the lowering water before it could get back to sea. We have heard other stories, one of blokes fishing from a boat, 40km inland who on every cast were bringing in bull sharks because the poor creatures had trapped themselves and were obviously starving.  It goes without saying then, that we heeded Brett’s advice to stay out of the water, no matter how inviting it looked.

From Moreton, it is only a short drive to Bramwell Junction, the start of the Overland Telegraph Track. After a quick stop to see if they had any bread, which they didn’t, we headed on in. After only a few kilometres, you get to the first of the dozen or so creek and river crossings for which the Tele Track is famous. Being so close to the beginning and fairly remote, you can imagine our surprise to find the way blocked by about six other 4WDs, one of them stuck in the middle of the creek.

From what we could gather, the group had only just started the track as well, on their way north. But at the first crossing they decided that breaking the front diff of their Jeep was a better idea and so did that instead. We only got there for the end of it, but apparently, they had spent a not inconsiderable amount of time turning the 4WD around in the creek and winching it back out the other side. Welcome to the Tele Track, thanks for coming, don’t let the door hit you on the way out. Unsurprisingly, I suppose, we had a bit of a crowd to watch us cross this creek, wondering if the exit would take another victim. It didn’t. Quite frankly I wonder how it took one in the first place, but that’ Cape York for you.

The Telegraph Track’s reputation plays on your mind more than it is deserved. Despite how often I have read about, heard about and even dreamt about the track, I was mildly surprised to find it is only about 100km of the 900km or so to the Tip from Cairns. However, that 100km took us nearly three days to cover.

One of the good things about the Tele Track is that for the most part, you say goodbye to the corrugations, which is an unprecedented relief. Don’t worry that 25km/h is now your top speed and you are reminded of that every time you hit 30km/h by an uncannily well-placed pothole or washout. Where the track isn’t just a well-ordered collection of potholes, it is broken up by rutted track barely wide enough to fit a 4WD, tight and twisted gravel roads that makes its way around bigger potholes, fallen trees and ruts deep enough to swallow a few 4WDs before dinner. And where the track isn’t potholed, rutted, tight or twisty, it is all four of them and usually with a creek or river thrown in to hide it all from sight.

The river and creek crossings provide most of the challenge throughout the Cape and also the most entertainment. It was not uncommon to find groups of people hanging around some of the more challenging crossings, openly cheering you on, but secretly hoping, I think, that you will get stuck, break down or do something interesting. Fortunately for us, we didn’t create too much spectacle, until we hit Canal Creek, one of the final crossings we did.

A little background, though. Along the Tele track, three crossings get all the attention. Palm Creek, I have already mentioned. The others, Gunshot and Nolan’s Brook are infamous. Gunshot Creek, if you have never heard of it, is a bit of a non-event as far as creek crossings go. It has a firm bottom, isn’t too deep and is short. However, getting to the creek, down an almost vertical drop, two or three car-lengths high into a brown puddle of water is insane. Enough that a bypass track has been developed which adds roughly 30km to your trip, yet people still take it, then drive back to Gunshot from the other side to watch the action. We took a B-line around the hardest parts, although it was still one of the most challenging parts of the track.

Nolan’s Brook was the other troublemaker this year. The only way across is through chest-deep water, soft sandy bottom and steep slippery exit. Nearly everyone we spoke to who did the crossing got stuck or was with someone who did. Half of those, as a result, had mechanical problems and everyone we asked, had a story of a mate of a mate who knew someone who had killed their 4WD in it.

In light of that background, I suppose our Canal Creek crossing wasn’t so spectacular, but I’ll tell the tale anyhow. The creek itself was one of the more difficult ones. The water was crystal clear, so it was hard to tell how deep it was. It was fairly rocky too, with a couple of big deep holes that we didn’t want to drive into. Usually, I would have walked it, but just as I got there, a bloke was in the process of doing that anyway, saving me getting my shorts wet. Under his helpful guidance, we got through the creek fairly quickly, but the creek bed on the other side was very rough. I manoeuvred the Patrol over to what seemed the most likely exit point and carefully motored up it. Bear in mind, the Patrol is close to 3 tonnes fully loaded (and I won’t say which side of 3 tonnes that is), River, our one-year-old daughter was asleep in the back, and we are fairly top-heavy, with the roof rack fully loaded. In hindsight, I don’t reckon we were close to going over, but at the time, the thought passed quickly through my head. Angela’s too, but she was committed enough to the camera to make sure the shot was in focus. With my heart beating quick enough to worry a cardiologist and River still asleep in the back, I calmly reversed down and changed my pants.

The other big attraction of the Tele Track is the camping. At nearly every creek is a lonely, secluded and free campsite. Most of the creeks are sufficiently small enough to be unattractive to crocodiles. Most afternoons, around lunchtime, we would pull up near a beautiful stream, head down to the water and sit in there until some of the dirt washed of us (I say some because plenty of it still hasn’t come off).  After cooling off, we would unload the car, get camp set up and just chill out till dinner time. Not a bad way to waste a few days if you ask me.

We exited the Tele Track earlier than many, arguing that with nine or so months of driving to go, we didn’t need to kill the Patrol crossing a creek to prove we could. From Sam’s Creek, our last night’s camp spot, it is only a short drive to the Jardine River Ferry. In the old days, people used to drive across the Jardine at a point a little east of the current ferry sight. It is deep and treacherous, so, for the most part, it is unused these days, but you still hear stories. I heard one, back when I was working full time, of a couple of blokes who got stuck halfway across. It was late in the day, they were by themselves, and neither was brave enough to risk the crocs and swim back to shore. With the 4WD filled with water, the pair and their dog spent the night on the roof, torches in hand and continually spotlighting the crocs who if anything, are patient. At some point during the night, the dog got taken, from the roof, between the two blokes. With that knowledge, 88 bucks doesn’t seem so expensive for a 75m ferry ride.

From the ferry to the Tip, all of the hard driving was behind us. We were running low on supplies, so we hightailed it all the way to Punsand Bay (which has a restaurant!), one of the campsites not far from the Tip, which came with good recommendations from a few people we had met. We held off on a visit to the Tip, preferring instead to lose a couple of lures on the reef just offshore, without the satisfaction of catching a fish in return. Like our visit to the northernmost point of the Australian mainland, our fishing excitement would have to wait.

Keen to explore Cape York and TNQ? Get the guide to Tropical North Queensland that’s written by locals. 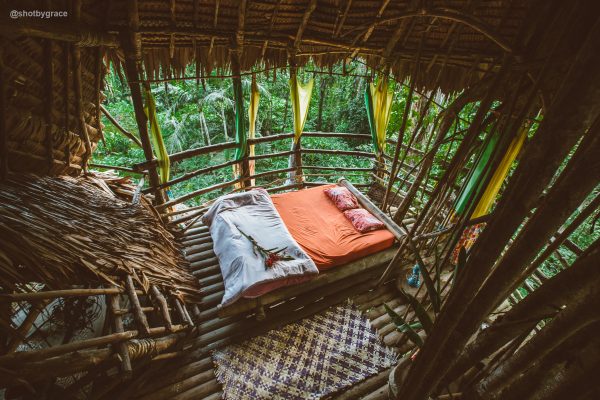 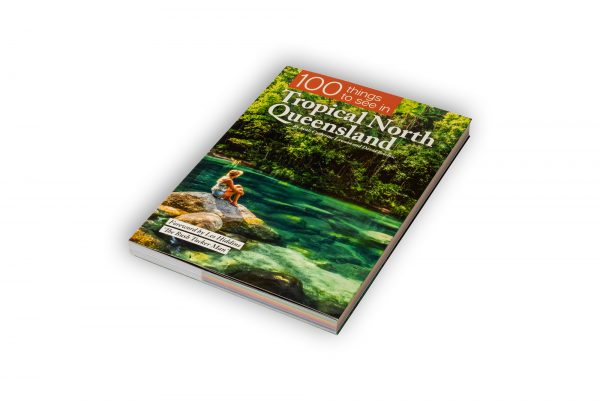 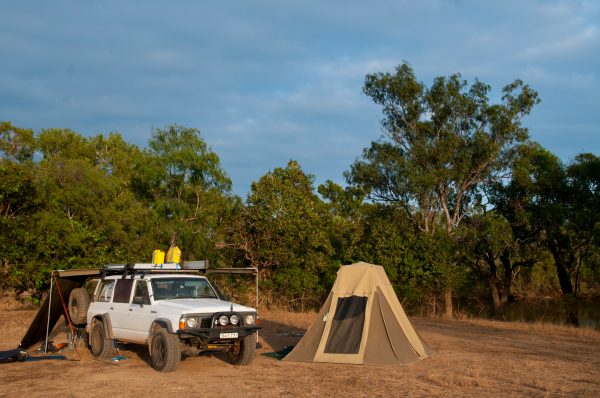